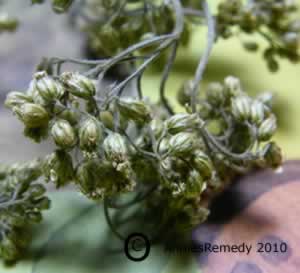 How to Use: Yarrow

Yarrow was once known as "nosebleed", it's feathery leaves making an ideal astringent swab to encourage clotting. Yarrow skin washes and leaf poultices can staunch bleeding and help to disinfect cuts and scrapes; taken as a tea it can help slow heavy menstrual bleeding as well. 79 80

Yarrow is a tonic bitter with additional anti-inflammatory, carminative and antispasmodic properties that make it useful as a secondary herb in digestive teas. (Weiss, Rudolf Fritz M.D.)

Yarrow is a good herb to have on hand to treat winter colds and flu; a hot cup of yarrow tea makes you sweat and helps the body expel toxins while reducing fever. 81The chemical makeup of yarrow is complex, and it contains many active medicinal compounds in addition to the tannins and volatile oil azulene. These compounds are anti-inflammatory, antibacterial, and help relax blood vessels. 82,83 Yarrow should be on every man's short list of remedies since the herb makes itself useful for everything from brewing beer to a hair rinse to prevent baldness. 6

Preparation Methods & Dosage :Tea can be made from both fresh and dried cut leaves and flower heads. The bitter taste can be masked with sweeter herbs and a bit of honey. Fresh leaves also can be used as a poultice to stop bleeding and chewed to relieve a toothache. Yarrow essential oil is used for external application for many of the same purposes. Yarrow can also be taken as an extract.

In China, yarrow is used fresh as a poultice for healing wounds. A decoction of the whole plant is prescribed for stomach ulcers, amenorrhoea, and abscesses.

Yarrow Side Effects: Avoid in pregnancy, can cause allergic skin reactions in sensitive people who suffer from allergies related to the Asteraceae family. Moderation is the key to safe use, the thujone content can be toxic over an extended period of time 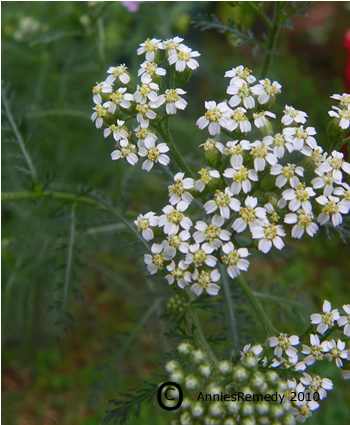 How to Grow Yarrow

Yarrow grows well as a perennial garden plant over most of North American, except the desert Southwest. Once established, it will come back year after year, without much fuss on the gardeners part at all. The fern-like, feathering, green leaves and flat-topped yellow to white flower umbels make an attractive addition to the backyard garden. Yarrow should be gathered while in bloom and dried for use in the winter season.

Everywhere this commonest of common weeds confronts us; the compact, dusty-looking clusters appearing not by waysides only, around the world, but in the mythology, folk-lore, medicine, and literature of many peoples. Chiron, the centaur, who taught its virtues to Achilles that he might make an ointment to heal his Myrmidons wounded in the siege of Troy, named the plant for this favorite pupil, giving his own to the beautiful Blue Corn­flower (Centaurea Cyanus). As a love-charm, as an herb-tea brewed by crones to cure divers ailments, from loss of hair to the ague; as an inducement to nosebleed for the relief of congestive headache; as an ingredient of an especially intoxicating beer made by the Swedes, it is mentioned in old books. Nowadays we are satisfied merely to admire the feathery masses of lace-like foliage formed by young plants, to whiff the wholesome, nutty, autumnal odor of its flowers, or to wonder at the marvellous scheme it employs to overrun the earth. 1
Yarrow was naturalized early in America, William Wood who traveled New England in 1629-66 spoke of perennial yarrow in gardens. Yarrow was an important medicine to keep on hand to stop bleeding and treat fevers.
Yarrow stalks are still used by the Chinese for casting I Ching predictions.