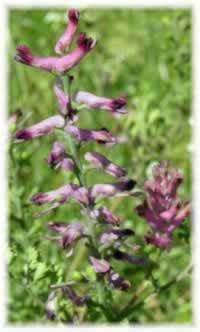 How to Use: Fumitory

The traditional medical uses of fumitory are as a skin treatment for eczema and other eruptions of the skin. The herb is taken as a tea for indigestion, and can be supportive in treating gallbladder and liver conditions.

Fumitory is an aperient, depurative, cholagogue(stimulating the flow of bile), directic, laxative, sedative, stomachic, sudorific and tonic. It has traditionally been used as a vermifuge, to treat the skin, as a digestive tonic, and in sclerosis of the liver 1

Preparation Methods & Dosage :Infusions and teas, capsules or extracts. The tea can be used in external skin care as compress for skin problems, or an eye wash for conjunctivitis. Dried fumitory leaves can also be smoked.

Fumitory Side Effects: Large doses can cause diarrhea 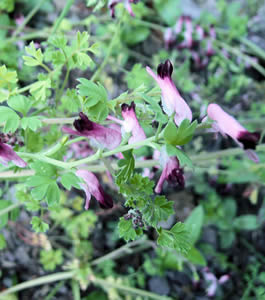 The common name "earth smoke" comes from the smoky appearance of fumitory's whitish flowers when viewed from afar. Fumitory is distant relative of the poppy,and is sometimes classified in the Papaveraceae family and is sometimes placed in its own Fumariaceae plant family.

Fumitory has been used at least since Roman times and was mentioned as a herb for eyesight by Pliny the Elder. Fumitory had a more prominent place in the herbal medicine of medieval and 18th century Europe than it does today. Culpepper and Grieve both valued it highly for serious conditions such as liver disease and leprosy
The name is said to be derived either from the fact that its whitish, blue-green colour gives it the appearance of smoke rising from the ground, or, according to Pliny, because the juice of the plant brings on such a flow of tears that the sight becomes dim as with smoke, and hence its reputed use in affections of the eye. According to the ancient exorcists, when the plant is burned, its smoke has the power of expelling evil spirits, it having been used for this purpose in the famous geometrical gardens of St. Gall. There is a legend that the plant was produced, not from seed, but from vapours arising out of the earth. 2

Saturn owns the herb, and presents it to the world as a cure for his own disease, and a strengthener of the parts of the body he rules. If by my astrological judgment of diseases, from the decumbiture, you find Saturn author of the disease, or if by direction from a nativity you fear a saturnine disease approaching, you may by this herb prevent it in the one, and cure it in the other, and therefore it is fit you keep a syrup of it always by you. The juice or syrup made thereof, or the decoction made in whey by itself, with some other purging or opening herbs and roots to cause it to work the better (itself being but weak) is very effectual for the liver and spleen, opening the obstructions thereof, and clarifying the blood from saltish, choleric, and adust humours, which cause leprosy, scabs, tetters, and itches, and such like breakings-out of the skin, and after the purgings doth strengthen all the inward parts. It is also good against the yellow-jaundice, and spends it by urine, which it procures in abundance. The powder of the dried herb given for some time together, cures melancholy, but the seed is strongest in operation for all the former diseases. The distilled water of the herb is also of good effect in the former diseases, and conduces much against the plague and pestilence, being taken with good treacle. The distilled water also, with a little water and honey of roses, helps all sores of the mouth or throat, being gargled often therewith
Nicholas Culpeper, 1653