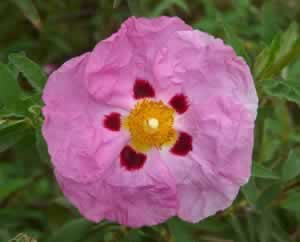 Rock rose was once a common botanical medicine in early America, mostly used by the Eclectics at the turn of the last century. Its most prominent modern use is in the homeopathic Balch flower remedies. Rose rose rescue remedy is recommended for fear and panic. The European rockwort, (Cistus Creticus, Linn.) is a source of the gum resin ladanum, and used as an ethical alternative to ambergris in the perfumery industry. The gum resin was once used in medicine as a emmenagogue and stimulant to the mucus membranes in treating coughs and colds.

“Cistus (Rock rose) has been long held in repute as a remedy for scofula and for many disorders.. especially for such persons needing as astringent,tonic, or alternative in cases of diarrhoea, ulcers, syphillis and the like. The prepartion in the Eclectic Materia Medica is Decoctum Heliantemi ”
Millspaugh, Charles F. "American Medicinal Plants" (1882) 106[28-2]

Frost-wort, or Rock rose is indigenous to North America where it ranges from Maine to Wisconsin and southward; it is found in sandy soil and flowers from April to August. In early winter the bark near the roots fissures and ice and frost project out- giving rise to the common name frostweed.