How to Use: Hops

Aged hops are sedatives, fresh hops provide bitters that stimulate digestion; these bitters are also found in the aged herb. In folk medicine, Hops teas are also used to relieve the pain of bladder infections and give prompt ease to an irritable bladder. Hops are a traditional cure for insomnia - a number of phytochemicals in hops are tonic, nervine and possess sedative and muscle-relaxing qualities. Hops contain compounds that depress the central nervous system supporting its main use as a sedative. Hops can be combined with other herbs in anti-anxiety formulas that can be beneficial for sleeplessness and nervousness.

Hops contains the most potent of all the plant estrogens, prenylnaringenin. For this reason, children of either sex who have not reached puberty should not be given hops. Limit use to small quantities of high quality formulations, or use fresh or dried hops with moderation. 1 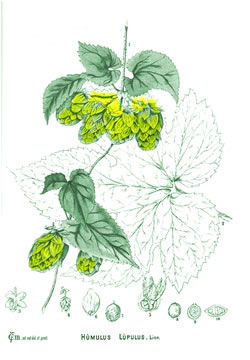 The ripened cones of the female Hop plant are the ones used in brewing, and appeared used as such in the breweries of the Netherlands at the beginning of the fourteenth century. The Hop was first mentioned by Pliny who speaks of it as a garden plant among the Romans, who ate the young shoots in spring.