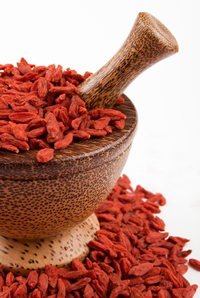 How to Use: Goji Berries

Goji berries are high in the ranks of superfruits along with the acai berry, the pomegranate, and Tahitian noni juice, touted for their health-boosting powers. These fruits are valued for their nutritive and antioxidant properties. There has not been much research done on this herb, but it's historical use in traditional Chinese medicine and makes it an important botanical to watch. Goji are also called Chinese wolfberries and are an important part of Eastern cuisine. You'll find them at Asian grocery stores often for much less than health food or herb suppliers.

Preparation Methods & Dosage :Eaten as food, or prepared as tea

A yin cooling tonic. Goji berries are valued in Chinese medicine and are used to strengthen the immune system, as a sexual tonic, improve vision, and as a liver and kidney tonic.

Goji Berries Side Effects: Lycii berries contains betaine, which is an emmenagogue and abortifacient. Avoid using when pregnant or nursing. Chinese herbalists suggest to abstain using it during times of cold and flu 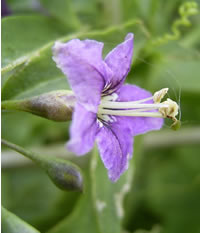 Renowned in Asia as a highly nutritious food, wolfberries have been used in traditional Chinese medicine for about 1,900 years. Wolfberries are often linked in Chinese lore to Shen Nung , China's legendary First Emperor, mythical father of agriculture, and herbalist who lived circa 2,800 BC