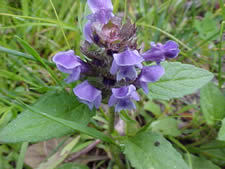 How to Use: Self-Heal 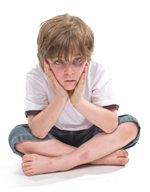 Culpepper, explaining the name 'Self-Heal' whereby when you are hurt, you may heal yourself, as the bruised, fresh leaves and flowers may be applied directly to a fresh wound. While self-heal is not so immediately effective as comfrey, yarrow, or bugle, it is a good herb to know about because of its almost universal presence and availability. One of its popular names "Carpenters Herb", indicates that it was traditionally used for many a mashed, bruised or cut finger

Preparation Methods & Dosage :The dried leaves of Prunella are often combined with other antibiotic herbs in making teas. Even a weak infusion of self heal has enough antibiotic and antiseptic effect to be an effective treatment for conjunctivitis and sties. Use the infusion in a sterile eyewash, or apply as a cool compress.

Self-Heal Side Effects: None noted.

This humble, rusty green plant, weakly lopping over the surrounding grass, so that often only its insignificant purple, clover-like flower-heads are visible, is another of those immigrants from the old countries which, having proved fittest in the fiercer struggle for existence there, has soon after its introduction here exceeded most of our more favored native flowers in numbers. Everywhere we find the heal-all, sometimes dusty and stunted by the roadside, sometimes truly beautiful in its fresh purple, violet, and white when perfectly developed under happy conditions. In England, where most flowers are deeper hued than with us, the heal-all is rich purple. What is the secret of this flower's successful march across three continents? As usual, the chief reason is to be found in the facility it offers insects to secure food; and the quantity of fertile seed it is therefore able to ripen as the result of their visits is its reward. Also, its flowering season is unusually long, and it is a tireless bloomer. It is finical in no respect; its sprawling stems root easily at the joints, and it is very hardy. Netje Blanchan Wild Flowers worth Knowing(1917)

Self Heal is one of those very common wildflowers that found their way to North America with the settlers.

. It is under the dominion of Mars, hot, biting, and choleric; and remedies what evils Mars afflicts the body of man with, by sympathy, as viper's flesh attracts poison, and the loadstone iron. It kills the worms, helps the gout, cramp, and convulsions, provokes urine, and helps all joint-aches.
Nicholas Culpeper, 1653