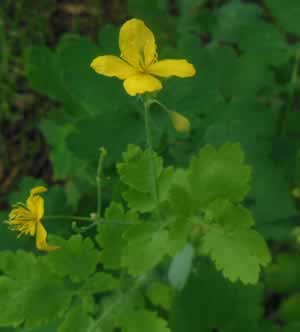 How to Use: Celandine

Culpepper's remedy for using Greater Celandine, “ The herb or root boiled in white wine and drank, a few Aniseeds being boiled therewith, opens obstructions of the liver and gall..”, was updated by Ms Grieve, 4 to include a recipe with the celandine boiled in milk as remedy as a cure for cataracts. The orange, acrid juice of the fresh herb is a traditional remedy for warts6 and ringworm, but should be used caution on small areas of the skin as it is caustic. Celandine share the constituent sanguinarine with bloodroot ,and like that herb is often mentioned as an herbal treatment for cancer. The information on this use is sketchy, consisting of a few animal studies where celandine was shown to suppress cellular growth.5 Celandine is most often used by modern herbalists for treating gallbladder problems, having a mildly antispasmodic, papaverine-like action on the upper digestive tract.4,5

Greater Celandine is most useful as a complement to other herbs tea preparations to support and improve the functions of the gallbladder for digestive health. It is said to be most effective when prepared from fresh plant sources. The strength of its effects can be inconsistant as theactive constiuents can vary greatly from one plant to the next.(Weiss, Rudolf Fritz M.D.) It would blend well with peppermint and milk thistle

Preparation Methods & Dosage :Tinctures, capsules. For tea use 2 teaspoons of leaf to a cup of boiling water and leave to infuse for 10 minutes. Drink hot 3 times daily for 3 week period

Traditional Chinese medicine uses celandine in cough medicines, as the herb acts as an expectorant, and pain reliever

Celandine Side Effects: Not to be used while pregnant. Celandine can be toxic in high doses, and is listed as a Narcotic and a Poison in Dr. James Dukes Ethnobotanical Database. 1 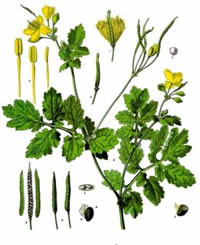 Celandine grows all over Germany and France, in waste places, on old walls, along roadways, and about dwellings ; it is pretty well naturalized in the United States, but so far it is not found at any great distance from dwellings, flowering from early in May until October. A fine gamboge-yellow, acrid juice, pervades the plant, root, stem and leaves ; this fact led those who practised upon the doctrine of signatures, to employ the drug in hepatic disorders, from its resemblance to bile in color. It proved one of the hits of that practice. The U. S. Ph. still mentions Chelidonium, but not officially; it will probably be thrown aside at the next revision as worthless, totidem verbis. 2

This is an herb of the Sun, and under the Celestial Lion, and is one of the best cures for the eyes; for, all that know any thing in astrology, know that the eyes are subject to the luminaries; let it then be gathered when the Sun is in Leo, and the Moon in Aries, applying to this time; let Leo arise, then may you make into an oil or ointment, which you please, to anoint your sore eyes with. I can prove it doth both my own experience, and the experience of those to whom I have taught it, that most desperate sore eyes have been cured by this only medicine; and then, I pray, is not this far better than endangering the eyes by the art of the needle? For if this does not absolutely take away the film, it will so facilitate the work, that it might be done without danger. The herb or root boiled in white wine and drank, a few Aniseeds being boiled therewith, opens obstructions of the liver and gall, helps the yellow jaundice; and often using it, helps the dropsy and the itch, and those who have old sores in their legs, or other parts of the body. The juice thereof taken fasting, is held to be of singularly good use against the pestilence.
Nicholas Culpeper, 1653

Celedine can be used for spastic discomfort of the bile ducts and gastrointestinal tract. In animal experiments iy has shown to be cytostatic, nonspecific immune stimulation.