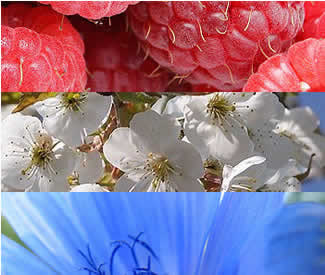 Red, red raspberries, white, wild cherry flowers and the auzure blue of chicory. North America has an amazing abundance of different climates and habitats that support many indigenous medicinal plants.

Conservationists and herbalists in the US and Canada are fighting to preserve our native plants, habitats are being lost not only to urbanization and pollution, but to our own traditions of exploiting our natural resources as if they were a bottomless well, never to be depleted. Many important North American medicinal herbs are woodland species, the uses and knowledge of which was passed along to the colonists of the New World from the indigenous native tribes. These settlers has also brought many of their favorite healing plants and herbs with them, and many European species have become naturalized here,making it hard to tell the natives from the immigrants in the best American tradition.

Eclectic medicine was populist medical movement in America during the 1840s with a philosophy of alignment with nature. They were opposed to the techniques of bleeding, chemical purging, and the use of mercury compounds common among the "conventional" doctors of that time. The Eclectics used many principles of Samuel Thomson's family herbal medication, and botanical remedies adopted from Native Americans. The movement peaked in the 1880s and 1890s, with the last Eclectic Medical school closing in Cincinnati in 1939.