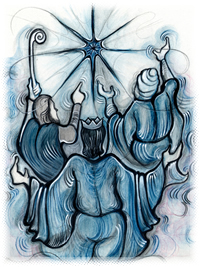 How to Use: Myrrh

Many ancient texts extol the healing properties of Myrrh as a cleansing, purifying agent and it continues to be a proven and popular remedy today. In the early 20th century myrrh was still being used in hospitals to treat bed sores. 1 Myrrh's antifungal, antiseptic and astringent actions makes it a specific in the treatment of infections in the mouth such as mouth ulcers, gingivitis, and phyorrhoea. 2 Used as a gargle it can help with laryngitis and respiratory complaints; it is both expectorant and a stimulant of circulation and finds many uses in the treatment of the common cold. Externally it is healing and antiseptic for wounds and abrasions and can be applied diluted with a carrier oil or used sparingly as a tincture. Myrrh is a useful agent for treating thrush, (Candida albicans) and athlete's foot fungal infections.

Preparation Methods & Dosage :Most often as a tincture, or the essential oil, rarely teas or capsule form.

The oil has a balsamic, warm and spicy aroma that blends well in Oriental, woody and forest-type perfumes.

In Ayurvedic medicine, myrrh is a favorite addition to the rasayanas for rejuvenation and disease prevention, especially as a spring tonic.

Myrrh Side Effects: Internal use not recommended while pregnant, overuse can cause cause nausea or vomiting 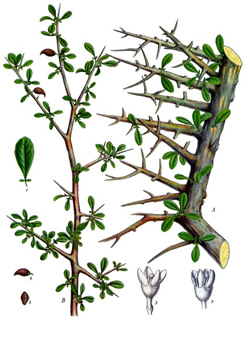 Koehler's Medicinal-Plants 1887
Today, most of the internationally-traded myrrh and frankincense resins are produced in the southern Arabian peninsula (Oman, Yemen) and in northeast Africa (Somalia). The primary species relied upon today are Commiphora myrrha for myrrh and Boswellia caraterii for frankincense.


One of the three gifts of the Three Magi, Myrrh was one of the ingredients in kyphi, a mixture of scents used in religious rituals in ancient Egypt, and was also used by them as incense and in embalming preparations