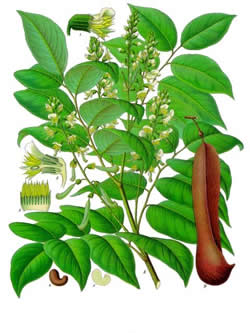 How to Use: Balsam of Peru

Balsam of Peru, or Tolu is used mainly in aromatherapy and perfumery for its vanilla and cinnamon scent. More than just a pretty scent, this resinous oil is antiseptic and healing to the skin and has similar properties of other balsams (Balsam poplars). Historically, Peruvian balsams were used in cough syrups and to kill parasites, but today balsam is used almost exclusively in topical applications. 2

Preparation Methods & Dosage :Use the resinous oil for troubled skin by diluting in a 2 to 3 percent solution of carrier oil.

Balsam of Peru Side Effects: Allergic reactions are possible, and it also may increase your sensitivity to sunlight. Whether taken internally or externally, large quantities of balsam of Tolu can damage the kidneys.

Balsam of Peru is taken from three closely related species of Myroxylon balsamum evergreen trees that grow in the tropical forests of South America. The oleoresin, or balsam is used as the base for botanical medicines and as a vanilla-cinnamon like base note and fixative in aromatherapy blends. The genus name Myroxlyon is taken from the Greek myron "myrrh" and xylon "wood". 1This beautiful, tall jungle trees are also known for their valuable , mahogany-like wood. The process of extraction produces three grades of a balsamic and aromatic resin.

Perivum balsam is not a native species of Peru, but was so named when it was shipped to 17th century Europe from Lima,Peru is a today exported mainly from El Salvador.