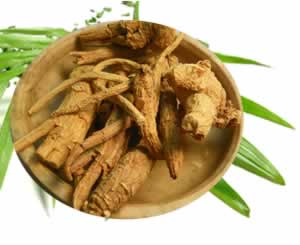 How to Use: American Ginseng

We tend to think of ginseng primarily as a Chinese herb, however American ginseng is just as valuable and in some cases more suitable. American ginseng is a "cooler" alternative to Chinese (also known as red or Korean) ginseng (Panax ginseng) for persons who have high blood pressure or for treatment during summer months.

Preparation Methods & Dosage : Ginseng is often taken for a month at a time, alternating with a two week rest period. Ginseng powder can be taken in teas, added to other soft drinks, or even used in cooking soups. Ginseng roots are also used as extracts, and in capsule supplements.

In Chinese traditions, American ginseng is considered to be more yin, helping to reduce the heat of the respiratory and digestive systems.

American Ginseng Side Effects: Do not use during pregnancy. Consult with a health professional before self treating if you have high blood pressure. 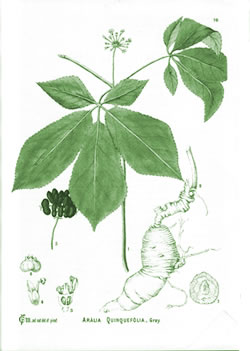 A heavy concentration of ginseng was once found in the Appalachian mountains, in fact plant geographers have recognized a phenomena know as the "disjunct eastern Asiatic-eastern North American range.

There are about one hundred genera of plants that only occur in eastern Asia and Eastern North America, including well-known plant groups such as sassafras, witch hazel, hickory, blue cohosh, and the most famous example, ginseng. These patterns of plant disjunctions, where plant populations are separated by dozens or even thousand of miles, are believed to be remnants of an ancient forest that covered much of the northern hemisphere about 70 million years ago 1

In appearance, American ginseng is a smaller version of its more famous Asian cousin. In the wild, American ginseng cohabits with other shade and moisture loving plants such as >wild ginger, may apples, goldenseal, rattlesnake ferns, and jack-in-the-pulpit. It can be found under ash, basswood, oak, elm and other deciduous trees. Ginseng has an affinity for shady north slopes, and prospers in loose rich soil.3

How to Grow American Ginseng

Ginsengs uses are legendary, and its lore springs from ancient times in China, as well as Native American folklore in North America.
Although it is a story that most Americans have never heard, a medicinal plant, wild American ginseng (Panax quinquefolius), played an essential role in establishing the roots of this colossal, centuries-old trade alliance between China and America.1