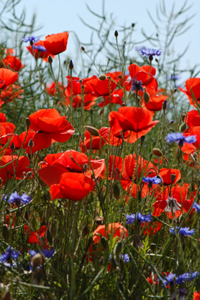 How to Use: Red Poppy Flowers

Red poppies have some traditional medicinal uses as a cough remedy, mild sedative and non-addictive sleep aid, though not nearly as potent as the related opium poppy, Papaver somniferum. These traditional uses have little or no documentation, so do not depend on red poppies as a primary therapeutic agent. Still the dried flowers brighten any herbal tea mixture, and adding them seems to have a soothing effect. 1

Preparation Methods & Dosage :The dried flowers can be taken as a tea, or powdered to put in capsules.

Red Poppy Flowers Side Effects: None noted, but can show up in toxicology screenings. 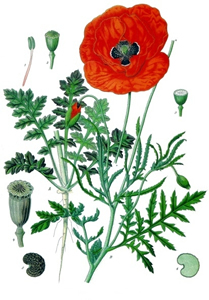 Koehers Medicinal Plants 1897
Red poppies are one of the most abundant and popular wildflowers in the world, so numerous as to seem a planted crop in the fields and meadows where they appear. The flowers ability to adapt itself to human agriculture is the reason poppys are noted by the words corn and field in the common names.

Related Species Papaver somniferum the opium poppy. The familiar black poppy seeds used to add flavor and texture to breads,rolls and pastries are produced by the same plant used to make opium, but never fear, it would be difficult, if not impossible, to get high. Poppy seeds contain only trace amounts of opium, not enough to get a high, but enough to influence a drug test. Poppy seeds are good for digestion and contain good for you fatty acids, ALA and CLA

The corn poppy has become a cultural icon to military veterans, and has become associated with wartime remembrance of the bloody battles on the Western front in World War I.

The herb is Lunar, and of the juice of it is made opium; only for lucre of money they cheat you, and tell you it is a kind of tear, or some such like thing, that drops from Poppies when they weep, and that is somewhere beyond the seas, I know not where beyond the Moon. The garden Poppy heads with seeds made into a syrup, is frequently, and to good effect used to procure rest, and sleep, in the sick and weak, and to stay catarrhs and defluxions of thin rheums from the head into the stomach and lungs, causing a continual cough, the fore-runner of a consumption; it helps also hoarseness of the throat, and when one have lost their voice, which the oil of the seed doth likewise. The black seed boiled in wine, and drank, is said also to dry the flux of the belly, and women's courses. The empty shells, or poppy heads, are usually boiled in water, and given to procure rest and sleep: so doth the leaves in the same manner;
Nicholas Culpeper, 1653