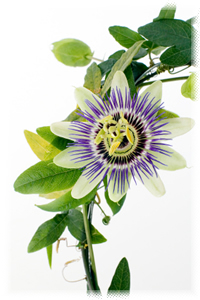 How to Use: Passion Flower

Herbalists have a high regard for the soothing properties of passionflower and recommend it as a general nerve tonic to treat nervous stress. The Commission E approved its use for anxiety. Passionflower is used to gently relax the mind/body to prepare for a more restful nights sleep. Other uses include neuralgia including post herpes nerve pain and shingles. Together in an extract, the alkaloids and flavonoids of passionflower are stronger sedatives and relaxants that one isolated chemical, reminding us of the wisdom of using the whole herb, instead of isolated extracts. Passionflower is often used in conjunction with other mildly sedative herbs like lemon balm and valerian.1

Preparation Methods & Dosage :Passionflower can be brewed into teas, made into tinctures, or encapsulated. Makes a great addition to bath blends. Passionflower is combined with hawthorn as a cardiotonic, and with lemon balm, Valerian, and St. Johns wort for sedative teas. 1

Passion Flower Side Effects: Passionflower may aggravate conditions caused by excessive testosterone (baldness and prostate problems in men, unusual aggression, hair growth, and skin problems in men and women) so this should be evaluated before consuming too much Passionflower. Not for use in pregnancy, can cause uterine contractions. 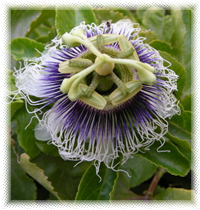 Passionflower is a climbing vine native to South Texas, Mexico, and Central America. It can be found in the southwestern and southern United States.

Passion flower leaves were used in Native American medicine to heal bruises and cuts. Its traditional uses by the Cherokees of the southern Allegheny mountains, the Houmas of Louisiana, and the Aztecs of Mexico, are well documented and predate its entry into conventional American and European medicine. It was official in the fourth (1916) and fifth (1926) United States National Formulary and removed in 1936. It was also an approved OTC sedative and sleep aid up until 1978 (Bown, 1995; Leung and Foster, 1996; NF, 1926)1
Passion flower was named such by Spanish explorers because they believed the flowers represented the Crucifixion, or Passion of Christ.