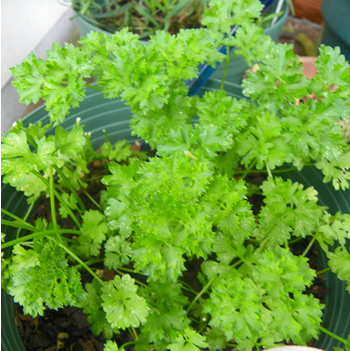 How to Use: Parsley

Parsley is so familiar we often pass it over for more exotic plant remedies, yet this attractive staple of the herb garden is a versatile medicinal food and an absolutely must have in any well stocked kitchen. Parsley adds color and aids digestion of the foods we eat and acts to prevent gas and bloating.

Parsley leaves and root are high in iron content and rich in vitamins A, B, C and trace minerals. Its high concentration of boron and fluoride might help against bone thinning and osteoporosis. (Duke,James, Ph.D., 165)

Both parsley leaf and root can be used in teas as a diuretic to rid the body of excess water. This may explain its folklore reputation for helping gout and rheumatism.

Preparation Methods & Dosage :Parsley can be used fresh or in teas.

Using Fresh Parsely One of the best ways to get the medicinal "good" out of parsley is to juice the fresh leaves, but this takes a whole lot of parsley to get just a small amount of intensely, green, herbaceous liquid. Throw some bunches of parsley in when you juice carrots and apples instead of trying to juice it alone. If you would like sweet breath after dinner, simply chew a fresh sprig of parsley, often handily served as a plate garnish in restaurants. Basil, dill and cilantro also contain chlorophyll, which acts as a breath freshener. Parsley leaves can be crushed and applied repeatedly to a bruise. This remedy may help speed the disappearance of black-and-blue marks.

Parsley Side Effects: The whole herb used in food rarely causes any problems. Concentrated extracts should be avoided by those with kidney inflammation Don't use parsley in medicinal doses if you are pregnant, it can stimulate the uterus. (Hoffmann, David, 589) 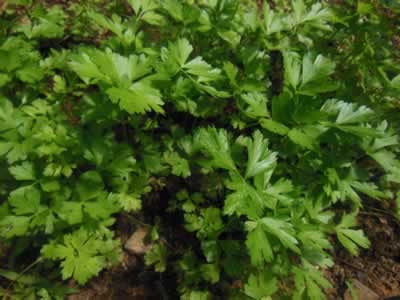 Parsley in the garden
Several cultivated varieties exist, the principle being the common plain-leaved, the curled-leaved, broad-leaved and celery-leaved. Of the variety crispum, or curled-leaved there are thirty-seven variations, the most valuable are those of compact habit with close, perfectly curled leaves.

How to Grow Parsley

You can never grow too much parsley, and there is a variety too suit every taste and situation. Parsley is the most widely cultivated herb in Europe, popular since Roman times. Parsley was brought to Newfoundland before 1620 by British sea captain John Mason, and was grown by the Plymouth colonists in their first gardens. 69 There are three main species of P. crispum, flat-leaved Italian parsley, which has the stronger flavor, and 'Moss Curled', a tightly compact, curly parsley most often used for garnish. P.c.var. tubersum,turnip-rooted parsley, has a large edible taproot, but the leaves have an inferior flavor. Parsley is a biennial, but is grown as an annual in areas with harsh winters. It is good to start new plants from seed each year in any case, and not depend on the second year growth for all your needs. Germination is slow, but can be hastened by soaking the seeds for 24 hours before sowing. Give your plants plenty of sun, and frequent water, don't let them dry out.

The variety crispum was grown in very early days, even mentioned by Pliny. The dried leaves are also used for that purpose. Parsley tea proved useful in the trenches (WWI), where our men got kidney complications, when suffering from dysentery.
Parsley was brought to Newfoundland before 1620 by British sea captain John Mason, and was grown by the Plymouth colonists in their first gardens.
The herb was never brought to the table of old, being held sacred to oblivion and to the dead. It was reputed to have sprung from the blood of the Greek hero Archemorus, the forerunner of death. There is an old superstition against transplanting parsley plants. The herb is said to be dedicated to Persephone and to funeral rites by the Greeks.