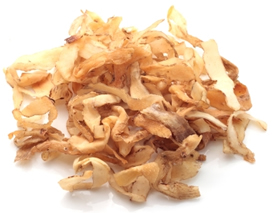 How to Use: Solomons Seal

Preparation Methods & Dosage :The root is used to make teas, extracts and is also found in capsule form. Usually used in conjunction with other herbs.

The leaves of Polygonatum resemble bamboo leaves, and the plant is known in the Chinese language as "jade bamboo,". It is a common plant in the mountains of northern China. The Chinese use the root of several polygonatum species as a cooling, demulcent, sedative, antiperiodic ( preventing the periodic return of attacks of disease, as of certain fevers, esp. malaria) and tonic. It was used to treat lung complaints, influenza, rheumatism and many other conditions.3

Solomons Seal Side Effects: Avoid when there is nervous stomach or other digestive disorders. The berries contain an anthraquinone that causes vomiting and diarrhea. 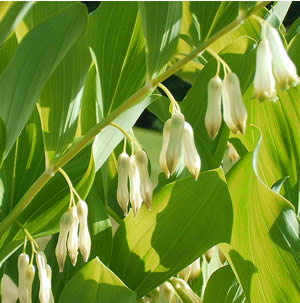 “From a many-jointed, thick rootstock a single graceful curved stem arises each spring, withers after fruiting, and leaves a round scar, whose outlines suggested to the fanciful man who named the genus the seal of Israel's wise king. Thus one may know the age of a root by its seals, as one tells that of a tree by rings in its trunk.” Netje Blanchan.Wild Flowers worth Knowing (1917)

Young shoots and leaves can be boiled and eaten like asparagus, while the rhizomes reportedly have been dried and ground into flour or boiled and eaten like potatoes. Numerous eastern North American tribes, including the Cherokee, Chippewa, Iroquois, and Menominee, used plants of the genus as an analgesic or stimulant, or as a dermatological, cathartic, gynecological, and gastrointestinal aid (D. E. Moerman 1986).1

The arching stems and fine foliage of Polygonatum add interest and focus to woodland shade gardens. Polygonia biflorum is native to North America and a member of the Ruscaceae family(formerly classified in the lily family, and is a close relative to the Lily-of-the-Valley.

: Saturn owns the plant, for he loves his bones well. The root of Solomon's Seal is found by experience to be available in wounds, hurts, and outward sores, to heal and close up the lips of those that are green, and to dry up and restrain the flux of humours to those that are old. It is singularly good to stay vomitings and bleeding wheresoever, as also all fluxes in man or woman; also, to knit any joint, which by weakness uses to be often out of place, or will not stay in long when it is set; also to knit and join broken bones in any part of the body, the roots being bruised and applied to the places; yea, it hath been found by experience, and the decoction of the root in wine, or the bruised root put into wine or other drink, and after a night's infusion, strained forth hard and drank, hath helped both man and beast, whose bones hath been broken by any occasion, which is the most assured refuge of help to people of divers counties of the land that they can have. It is no less effectual to help ruptures and burstings, the decoction in wine, or the powder in broth or drink, being inwardly taken, and outwardly applied to the place
Nicholas Culpeper, 1653