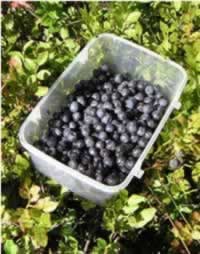 How to Use: Bilberry

Billberry is best known for it's
beneficial effects on eyesight

Bilberry is one of the most trusted herbal medicines for eye health. Bilberry fruits contain chemicals called anthocyanosides that support good circulation in the small capillaries around the eyes.

Bilberry has beneficial effects on many disorders from poor vision and diabetes to high cholesterol and blood pressure. Because capillary damage is the primary factor in a number of eye diseases, such as diabetic retinopathy, glaucoma, and cataracts, bilberry extracts are often promoted as a source of protection. This great tasting berry also finds a place in the home herbalist's medicine cabinet as a simple and effective remedy for reducing bruises from black eyes.

Bilberries, along with black cherries, blueberries, and strawberries have proven their ability to reduce levels of uric acid. Those suffering from gout should be getting at least two servings a day of these berry gout fighters. During the winter when fresh berries are not available, used dried bilberries in tea, and frozen blueberries as desserts.

Preparation Methods & Dosage :Use 1 teaspoon crushed, dried berries to each teaspoon of water. Bilberry is a great tasting tea, and blends well with spices like cinnamon, or with other berries.

Bilberry Side Effects: Not for use during pregnancy. Don't use in extremely high doses, or if you are taking prescription blood thinners. Bilberry may cause hypoglycemia in diabetics. 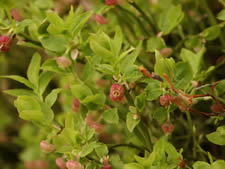 The ancients used the fruits of the Vaccinium largely, and Dioscorides spoke of them highly (Grieve, AMH) The ripe fruit is best for therapeutic purposes, but the leaves are used also.

English herbalists referred to bilberries as wortleberries and prescribed them for diarrhea and stomach complaints. American herbalists later combined "whortleberries" with gin to make a diuretic

They are under the dominion of Jupiter. It is a pity they are used no more in physic than they are. The black bilberries are good in hot agues, and to cool the heat of the liver and stomach; they do somewhat bind the belly, and stay vomiting and loathings; the juice of the berries made in a syrup, or the pulp made into a conserve with sugar, is good for the purposes aforesaid, as also for an old cough, or an ulcer in the lungs, or other diseases therein.
Nicholas Culpeper, 1653