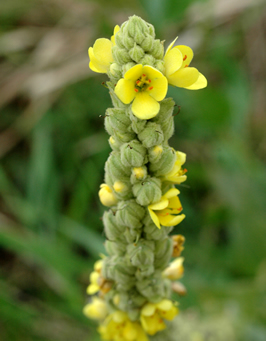 How to Use: Mullein

The ancient reputation that mullein enjoyed in both in Europe and Asia of having the power to exorcise evil spirits may be attributed to the magic mullein oil can perform on an ear ache. 1 A combination of garlic and mullein flower oil is the traditional oil used for ear infections which is both antibacterial and analgesic. 2 A combination oil of garlic and mullein is good for our animal companions as well, it works on ear mites and helps control fleas and itching.3 Mullein flowers are also used in teas to coat sore throats and calm coughing. Mullein tones and soothes irritated lungs and speeds healing of damaged tissues, which could help lungs damaged by smoking recover. Mullein is one of the traditional smoking herbs as well, which could be used as a tobacco substitute to help smokers quit as well. Mullein flowers infused in olive oil are also used to ease the pain of swollen rheumatic joints. 4

Preparation Methods & Dosage :Fresh mullein flowers can be made into extracts, infused in oil, or taken as a tea. Often combined with garlic in oil and with other herbs in teas for coughs: anise, coltsfoot, marshmallow, and comfrey. A fresh poultice of the mashed leaves make an excellent antimicrobial, astringent first aid remedy for minor burns and insect bites. Mullein combines well with black cohosh and Lobelia inflata in liniments.

This wayside weed is common to clear-cuts, burned areas, and partially developed lands in the West, where it often serves to regain biological balance and prevent erosion.

How to Grow Mullein

Plant prefers disturbed soil, full sun and moderate water. Start in flats and transplant when first leaves appear Needs light to germinate. Hardy Biennial Flowers can be collected from 2 year old plants as they open. Seeds can be saved for years. Leaves can be harvested as they appear, in the first year of growth. Flowers,leaves and buds can be harvested, dried and stored in airtight jars.

"I have come three thousand miles to see the mullein cultivated in a garden, and christened the velvet plant,'" says John Burroughs in "An October Abroad." But even in England it grows wild, and much more abundantly in southern Europe, while its specific name is said to have been given it because it was so common in the neighborhood of Thapsus; but whether the place of that name in Africa, or the Sicilian town mentioned by Ovid and Virgil, is not certain. Strange that Europeans should labor under the erroneous impression that this mullein is native to America, whereas here it is only an immigrant from their own land. Rapidly taking its course of empire westward from our seaports into which the seeds smuggled their passage among the ballast, it is now more common in the Eastern states, perhaps, than any native. Forty or more folk-names have been applied to it, mostly in allusion to its alleged curative powers, its use for candle-wick and funeral torches in the Middle Ages. The generic title, first used by Pliny, is thought to be a corruption of Barbascum( = with beards) in allusion to the hairy filaments or, as some think, to the leaves. Netje Blanchan Wild Flowers worth Knowing(1917)


Both in Europe and Asia the power of driving away evil spirits was ascribed to the Mullein. In India it has the reputation among the natives that the St. John's Wort once had here, being considered a sure safeguard against evil spirits and magic, and from the ancient classics we learn that it was this plant which Ulysses took to protect himself against the wiles of Circe. 2

It is under the dominion of Saturn. A small quantity of the root given in wine, is commended by Dioscorides, against lasks and fluxes of the belly. The decoction hereof drank, is profitable for those that are bursten, and for cramps and convulsions, and for those that are troubled with an old cough
Nicholas Culpeper, 1653