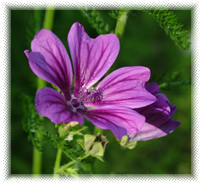 How to Use: Mallow, Marsh 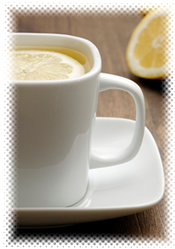 Marshmallow is a soothing and healing plant mainly due to it's high mucilage content. This spongy, gummy fiber soothes all the way down from the mouth and throat to the urinary tract.1 It is both demulcent (soothing on the mucus membranes on the inside) and emollient (soothing to inflamed skin on the outside).2 Mallow acts as a mild expectorant and helps to clear congestion while it coats sore throats making it very useful in the treatment of harsh coughs. Marshmallow's tannins make it a popular treatment for UTI and stomach ulcers, it also acts as a light diuretic. To get the full benefits of marshmallow for these conditions, add chopped marshmallow root to herbal teas as opposed to taking it in capsule form.

Preparation Methods & Dosage :Marshmallow is taken as a soothing tea to take advantage of the tannin and mucilage it contains. Use the chopped root and prepare as a decoction by bringing to a boil and simmering. Combines well with mullein and coltsfoot for persistent coughs.

Mallow, Marsh Side Effects: Marshmallow is a food plant, and it's safety is substantiated by many years of use in both humans and animals. The high concentration of mucilage and pectin in marshmallow might interfere with medications, if taken at the same time 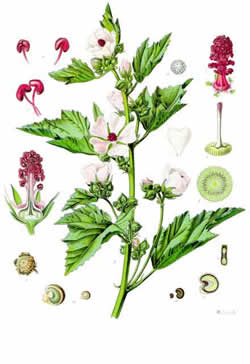 Koehler's Medicinal-Plants 1887
Marsh Mallow (Althaea officinalis), a name frequently misapplied to the Swamp Rose-mallow, is properly given to a much smaller pink flower, measuring only an inch and a half across at the most, and a far rarer one, being a naturalized immigrant from Europe found only in the salt marshes from the Massachusetts coast to New York. It is also known as Wymote. This is a bushy, leafy plant, two to four feet high, and covered with velvety down as a protection against the clogging of its pores by the moisture arising from its wet retreats. Plants that live in swamps must perspire freely and keep their pores open. From the marsh mallow's thick roots the mucilage used in confectionery is obtained, a soothing demulcent long esteemed in medicine. 3