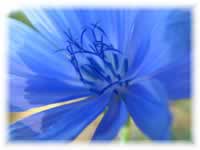 How to Use: Chicory 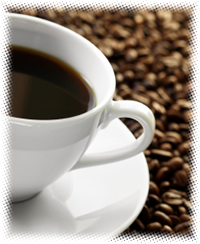 The dark, rich flavor of chicory is best known as a southern substitute for coffee, but herbalists value chicory as a bitter digestive tonic. Drinking chicory on a regular basis helps to rid your system of excess water and uric acid buildup without depleting potassium and other minerals, helping to support the liver and the heart. This also makes chicory a good beverage for those with rheumatism and gout. In this respect it mirrors and complements the properties of dandelion, with which it is often combined. 93 Chicory has a long standing reputation as a medicinal herb, M. Grieve recommended it in her 1931 Modern Herbal

“Chicory be taken freely in cases of gout, jaundice and rheumatic complaints.” 91

Chicory is also a good source of inulin, a prebiotic important to the immune system and other compounds that are anti-inflammatory and antibacterial. 63

Chicory Side Effects: Avoid excessive consumption if you have gallstones 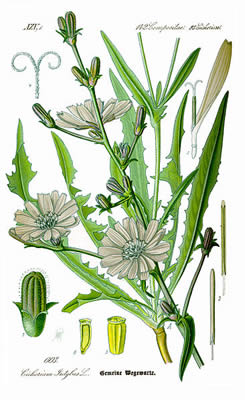 How to Grow Chicory

Chicory was introduced to the United States and southern Canada from Europe and will grow almost anywhere. Chicory's bright, deep blue flowers make it an attractive garden plant even if you don't grow enough to harvest the long taproot that is roasted and used in herbal beverages.

From the depth to which the tap-root penetrates, it is not unlikely the succory derived its name from the Latin succurrere to run under. The Arabic name chicourey testifies to the almost universal influence of Arabian physicians and writers in Europe after the Conquest. Netje Blanchan Wild Flowers worth Knowing(1917)

The chicory plant is one of the earliest cited in recorded literature. Horace(65 BC - Rome) mentions it in reference to his own diet, which he describes as very simple: "Me pascunt olivae, me cichorea, me malvae" ("As for me, olives, endives, and mallows provide sustenance") Wikipedia