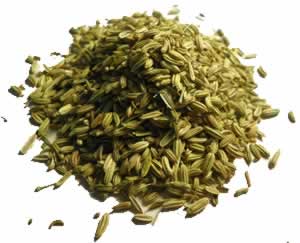 How to Use: Fennel

Fennel acts as an excellent digestive aid to relieve abdominal cramps, gas and bloating. The fresh stems of fennel can be eaten much like celery, the seeds add a lovely anise flavor to fish and other dishes. If you expect to eat a vegetable that you have trouble digesting, like cabbage, try adding fennel seeds to your recipe. 335

The Greek name for fennel was marathon was derived from "maraino", to grow thin, reflecting the widely held belief that fennel affected weight loss, a belief that was echoed by William Coles, in "Nature's Paradise" (1650)

both the seeds, leaves and root of Garden Fennel are much used in drinks and broths for those that are grown fat, to abate their unwieldiness and cause them to grow more gaunt and lank.

Fennel's ancient reputation as a weight loss aid still holds up today. Drinking a cup of fennel seed tea 15 minutes before eating a heavy meal seems to take the edge off your appetite. Fennel also tunes up digestion, helping to turn food into energy instead of fat.

Preparation Methods & Dosage : Fennel is well known to cooks, all parts of the plant are edible. The fresh stems of fennel can be eaten much like celery, and the seeds add a lovely anise flavor to fish and other dishes. Fennel seeds are most often taken as a tea, the essential oil is used in massage oils and diffusers.

In the Kitchen: All parts of fennel are edible, stalks, leaves and bulbs. Fresh leaves can be used as flavoring in soups and sauces. The bulbs can be used in Italian dishes. Fennel seeds make an excellent tea.

Fennel increases the digestive fire without aggravating pitta. Its energy is in dispute some say warming, others cooling, most likely neutral. It calms the nerves, is the premier carminative herb for adults, and promotes mental clarity. 603

Fennel Side Effects: Fennel has virtually no side effects when used as a food, or as a seed tea. The essential oil should be avoided in pregnant and nursing mothers. 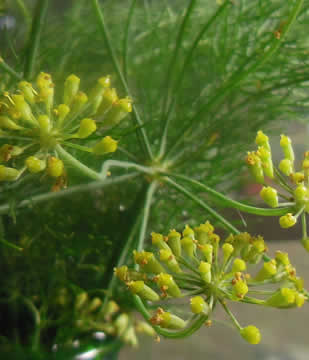 How to Grow Fennel

Fennel will thrive anywhere, but needs its own space to grow, apart from the main garden. Fennel plants release a chemical, (anethole) that impairs the growth of some other plants, so it should not be grown very close to beans, tomatoes or cabbage family plants. Fennel grows well in its own big container in a rich soil. It is easily propagated by seeds, sown early in the year, and is frost resistant. You can direct sow, or transplant, about a foot or so apart. Fennel thrives in dry and sunny places that remind it of it's mediterranean home. Harvest the leaves anytime, and the bulbs when large enough. Keep flower heads cut to insure a supply of green leaves, or let flower heads mature to harvest seeds when ripe.


In medieval times, Fennel was employed together with St. Johns Wort and other herbs as a preventative of witchcraft and other evil influences, being hung over doors on Midsummers Eve to warn off evil spirits