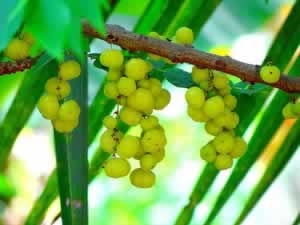 How to Use| Side Effects |

How to Use: Amalaki

Amalaki is one of three fruits used in the Ayurvedic herbal formula called triphala (which, in Hindi/Sanskrit, means literally "three fruits"). 1These fruits in combination are thought to balance the three doshas : Amalaki is sour and balances pitta. Bibhitaki (Terminalia belerica) is sweet and pungent and balances kapha, and haritaki (Terminalia chebula) is bitter and balances vata. This formula is used to treat obesity, and can be especially effective and safe for chronic constipation.

Triphala is considered by many to be one of the most valuable of formulas in Ayurvedic medicine because it detoxifies the blood and liver without depleting valuable nutrients. In fact amalaki is a strong antioxidant and the highest known source of vitamin C. Triphala is a classic longevity tonic that has thousands of years of historical use, yet only few modern scientific studies have attempted to assess its value. It has shown promise against inflammatory rheumatoid arthritis and high cholesterol. It may prove to have potential activity against some cancers. 2

ith the product, then spit it out. The raw red juice pressed from the root is poisonous.

Preparation Methods & Dosage :Triphala powder has a strong taste and can be taken in capsules, however this is not as effective as when taken as a tea or mixed with a small amount of honey or juice. When used as a digestive tonic or laxative, it is best taken in the evening, about two hours after eating, and at least 30 minutes before bedtime. No food should be eaten for one and a half hours after ingestion.1