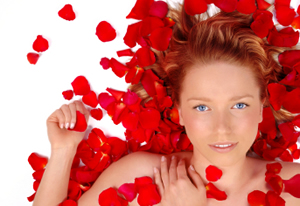 How to Use: Rose

The rose was one of the most valued medicinal plants in the monastery gardens of medieval Europe. Rose petals suitable for medicinal purposes must yield a deep rose-colored, astringent, and fragrant infusion when boiling water is poured upon them. Unfortunately many modern cultivars have been chosen more for vibrant display at the cost of aromatic scent. When we consider rose as a medicinal herb today, we tend to focus only of the high vitamin C content of the rosehips, or the value rose holds in healing damaged skin. A closer look reveals even more of the healing powers of this classic garden favorite.

Rose petals are astringent and can be used as a skin wash to staunch bleeding from scrapes and cuts. Luxurious rosewater is a welcome addition to almost any natural beauty and skin care formulation. Rose petals can turn an everyday bath into a luxurious spa treatment for the body and spirit. Rose petals and rose oils hold a special place in facial care . Rosewater can be used alone as a facial wash or incorporated in lotions and creams. Homemade rosewater is inexpensive, easy to make, fresher and better quality than commercial brands.

The rose is sensual, evocative, and evokes the spirit of love in the heart and mind. Rose is a classic aphrodisiac because it affects both mind and body in a synergistic fashion. The scent of roses can reach within to lift depressive moods and create a feeling of well being and mild euphoria. (Nickell, Nancy L.)

Preparation Methods & Dosage : Rose bark and rose petals make an astringent skin care wash that can help cleanse wounds and stop bleeding. Rosewater can be used on its own as a facial toner, and forms the basis for rose cold creams and facial lotions. A few drops of rose oil adds depth, and an unmistakable fragrance to any skin care remedy. Both rose petals and rose hips can be used in herbal teas and as bath infusions, rose hips have the stronger flavor.

Rose Hips are both Pitta and Kapha dominant

Rose Side Effects: None noted 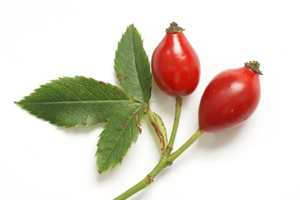 The Damask rose (Rosa damascena), Provence rose (Rosa Gallica) and Eglantine(Rosa elganteraia) are the three oldest roses in cultivation and are considered to be the most fragrant roses in the world. Rosa gallica var. officinalis, the apothecary's rose, was once the official cultivar in The British Pharmacopoeia.

Wild roses: Just as many members of the lily tribe show a preference for the rule of three in the arrangements of their floral parts, so the wild roses cling to the quinary method of some primitive ancestor, a favorite one also with the buttercup and many of its kin, the geraniums, mallows, and various others. Most of our fruit trees and bushes are near relatives of the rose. Five petals and five sepals, then, we always find on roses in a state of nature; and although the progressive gardener of today has nowhere shown his skill more than in the development of a multitude of petals from stamens in the magnificent roses of fashionable society, the most highly cultivated darling of the greenhouses quickly reverts to the original wild type, setting his work of years at naught, if once it regain its natural liberties through neglect.

To protect its foliage from being eaten by hungry cattle, the rose goes armed into the battle of life with curved, sharp prickles, not true thorns or modified branches, but merely surface appliances which peel off with the bark. To destroy crawling pilferers of pollen, several species coat their calices, at least, with fine hairs or sticky gum; and to insure wide distribution of offspring, the seeds are packed in the attractive, bright red calyx tube or hip, a favorite food of many birds, which drop them miles away. Netje Blanchan Wild Flowers worth Knowing(1917)

It was between 1582 and 1612 that the oil or OTTO OF ROSES was discovered, as recorded in two separate histories of the Grand Moguls. At the wedding feast of the princess Nour-Djihan with the Emperor Djihanguyr, son of Akbar, a canal circling the whole gardens was dug and filled with rose-water. The heat of the sun separating the water from the essential oil of the Rose, was observed by the bridal pair when rowing on the fragrant water. It was skimmed off and found to be an exquisite perfume. The discovery was immediately turned to account and the manufacture of Otto of Roses was commenced in Persia about 1612 and long before the end of the seventeenth century the distilleries of Shiraz were working on a large scale. The first mention of Persian Otto or Attar of Roses is by Kampfer (1683), who alludes to the export to India.

Roses were grown in monastery gardens in the Middle Ages in Europe and used by the monks for medicinal purposes. The French have been distilling roses since before the French revolution, these early French ottos were a byproduct of the distillation process. (Grieve, M.,684)


In Colonial times, the Rosa alba was brought from England to Plymouth colony where it is now known as the Plymouth rose. Other English cultivars were also prominent plants in early American gardens.


The rose plays a prominent role in Greek and Roman mythology In literature, ancient and modern, sacred and profane, no flower figures so conspicuously as the rose. To the Romans it was most significant when placed over the door of a public or private banquet hall. Each who passed beneath it bound himself thereby not to disclose anything said or done within; hence the expression sub rosa, common to this day. Blanchan, Netje Wild Flowers worth Knowing(1917)

red Roses are under Jupiter, Damask under Venus, White under the Moon, and Provence under the King of France. The white and red Roses are cooling and drying, and yet the white is taken to exceed the red in both the properties, but is seldom used inwardly in any medicine
Nicholas Culpeper, 1653