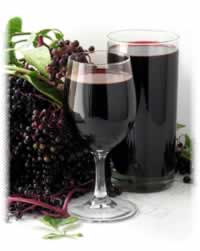 How to Use: Elder

Leaves of the elder tree are used in an ointment that is a folk remedy for bruises, sprains, chilblains and hard-to-cure skin irritations. The flowers are used to make infusions to treat bronchitis and colds, and cooled elder flower tea is a soothing medicine for eye irritations, and of course, the tasty berries are used to make elderberry wine and cordials. Elderberries have had many traditional healing uses throughout the ages, and have been used for constipation, colic, diarrhea, colds and rheumatism.

The dried berries make a tart and tasty, purple elderberry tea that is a family favorite at my house, especially in the winter. Combines well with hot spicy accents like cinnamon and ginger for a good cold remedy.

Preparation Methods & Dosage :Elderberries can be made into homemade syrups, and herbal teas. Both the flowering tops and berries can be used. Sambucol is a popular commercial preparation made from elderberry extract.

Elder Side Effects: Bark and root are emetic and should not be taken internally, (they will make you throw up). 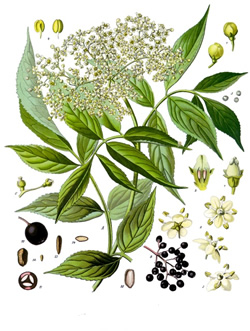 How to Grow Elder

Gather elder flowers when they are in early bloom and dry them is a warm, dry place. Elder flowers are delicate, and will discolor if you apply too much heat.

Elder was used in Rome and 11th century Italy for healing. The 17th century herbalist John Evelyn praised the healing virtues of elder in his herbal. Elder leaves, boiled with linseed oil are an old English remedy for wounds and bruises.


It was thought the Elder could not be hit by lightning, and so should be planted near the house. In the sixteenth century it was believed that the leaves of the elder should be gathered on the last day of April, and hung on doors and windows to prevent witches from entering the house. A twig of Elder carried close to the body, was thought to give good health and luck.

The Druids believed that elder was inhabited by the Elder Mother, and the tree was sacred Frau Holle, the "witch goddess". Circle dances were performed around the tree in midsummer at the summer solstice when the elder bloomed, it was associated with the ecstasy of summer love. Claudia Muller-Ebeling, Wolf-Deieter Storl Witchcraft Medicine(1998)